The freight division of the company Renault began to play a prominent role in the European automotive market since 1978, when a group Saviem (which included several French companies, including manufacturing of commercial vehicles Renault) and another major French manufacturer of commercial vehicles, the company Berliet, merged under the guise of Renault Vehicules Industriels. In 1983 joined the European Dodge, and in 1990 – the American Mack. In 1992, Renault Vehicules Industriels becomes Renault V. I., and in 2001, is part of Volvo Group, both receiving the present his name – Renault Trucks. In Russia its interests are represented by OOO "Renault trucks Vostok". In 2009, in Kaluga was put into operation the plant of Volvo Group, which was deployed to the release of the Volvo FM and FH, and also for Renault Premium and Renault Kerax, the first of which rolled off the Assembly line in 2010. At the end of 2011 there was collected 5,000 th truck, and the daily output increased to 9 cars. The production volume of Renault trucks plant in Kaluga in 2013 decreased by 65% to 542 units, due to the transition to the new scheme of direct sales, bypassing distributors. In the summer of 2013 next to the Assembly site Renault-Volvo construction began on the new plant of the cabins, the investment in which amounted to over 90 million euros. The opening of the new plant, which at the same time doing the cockpit for Renault and Volvo occurred in November 2014, and even earlier – in October 2014 in Kaluga, started production of the new model series of trucks (the R series). And literally within a block the production in Kaluga... it was frozen and resumed only when the market has begun to thaw.

In mid-2013, Renault Trucks introduced a completely new range, which took eight years and cost nearly two billion euros. The modern range are the following families: "delivery" models of the D series (total weight from 7.5 to 26 tonnes) with engines DTI 3 series (power up to 180 HP) DTI 5 (240 HP), DTI 8 (320 HP) depending on configuration and the type of cabin; construction and short-haul C-series models with DTI 8 engines (320 HP), DTI 11 (up to 460 HP) or DTI 13 (520 HP), heavy construction model K series heavy haul series model T engines DTI 11 (up to 460 HP) or DTI 13 (520 HP). Production of a new generation of Renault trucks in Europe began in the fall of 2013. On the Russian market a new generation with upgraded engines of Euro-5 DXi line, adapted to Russian conditions of exploitation came in the end of 2014 with the launch of a local Assembly plant in Kaluga.

Modern serial model range of Renault Trucks (left to right): Renault T High with high cab, Renault T with a basic cabin (upgraded in 2016), Renault K Renault C with high and basic cabins, Renault D with a base, and a narrow distribution of urban cabins

2016 Renault Track has expanded the potential application of its proprietary OptiTrack system with auxiliary hydraulic motors in the hubs of the front wheels to increase traction in difficult road conditions (for example, the dump truck in the quarry or at the site) also in a multi-axis version of the 8x2*6 and 8x4. 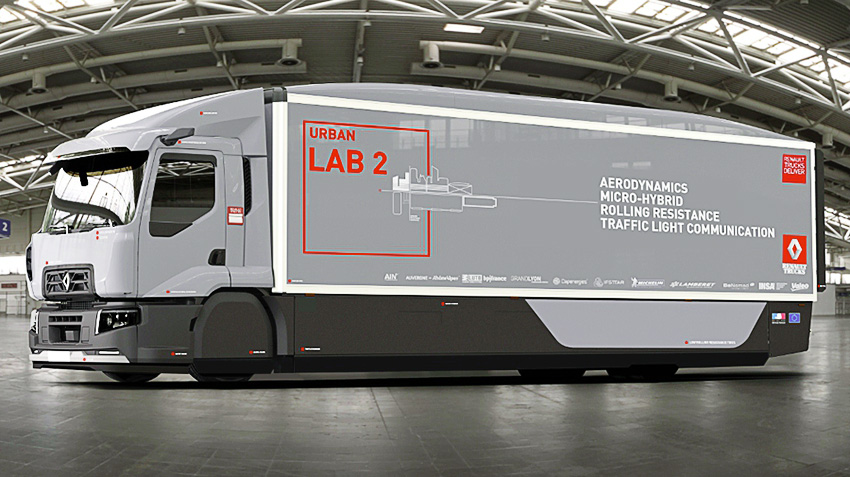 Delivery trucks Renault Trucks intended for use in urban or regional transport short and medium-haul, called Renault D. Proposed two versions to choose from – D (cabin width 2.1 m) Wide and D with a more spacious cabin with a width of 2.3 m and a three-axle chassis. In fact, the cabin remained "milanowski", but received a completely new design of the front part including the signature three-dimensional grille and a significantly upgraded interior. The total mass of D series is from 12 to 16 t (D for Wide – total weight up to 19 tons), the maximum gross combination weight of 32 tons (for D Wide – up to 44 tonnes). Types of cabins – standard Day Cab with a length of 1.6 m (standard or high roof), the average Global sleeper length 2.0 m, long Night & Day Cab with a length of 2.2 m and 4 double-bedded cabin Crew Cab (length of 2.98 m). Wheelbase of 2700 to 6800 mm (useful length of the frame is 3.5–9.5 m). For the Russian market the D-series trucks equipped with the modernized 6-cylinder inline diesel DXi 5 (capacity 180 or 220 HP) or DXi 7 (capacity of 270, 300, 310 or 340 HP), meets Euro-5. Installed transmission – 6 or 9 speed manual or Allison automatic robotic 6-speed. Front suspension spring, rear – spring or pneumatic. Brake mechanisms of all wheels disc with ABS and ESC stabilization system. All-wheel drive version equipped with a reinforced chassis, bumper and suspension. The list of equipment includes led running lights, mountain "assistant" HSA, seat with air suspension and heated, durable three-piece front bumper with steel corners.

Construction trucks, which replaced the series are referred to as Premium Lander Renault C. the current generation offered in two -, three - or four-axle version and is intended for transportation of goods to construction sites, installation of a variety of special superstructures and equipment, including dump add-in. C-series feature either a cab width of 2.3 m (based on cab – a deep modernization of cockpit Premium) in the versions Day Cab (length 1.6 m), Global Cab (length 2.0 m) or Sleeper Cab (length 2.2 m) for the "average" versions of full weight up to 26 tonnes, or a new cab with a width of 2.5 m in options Day Cab (1.8 m) without bed, Night & Day Cab (length of 2.31 m, low sleeping cabin) or a Sleeper Cab (length of 2.31 m high sleeping cabin internal whose height of 2.14 m) to "heavy" versions of full weight up to 33 T. mostly In the C family consists of chassis, but the model line is included and several truck tractors 4x2 or 6x4. In the engine compartment of the series C install upgraded to Euro 5 6-cylinder in-line engines two models – DXi 11 power 380, 420 or 460 HP or DXi 13 (440, 480 and 520 HP). The structure of the power units of the "younger" line C enter the 6 - or 9-speed manual or, 12-speed automatic transmission, Allison, and for the older version has the standard 12-step "robot" Optidriver advanced mode Off-Road for work on construction sites or optional 16-speed manual gearbox. In the suspension used leaf springs or "Pneumatics", brake mechanisms of all wheels the disk for four-wheel drive versions provided dual driving axles with two stage gearboxes. You can also order regular PTO and three types of mounting add-ons to choose from – flexible, semi-flexible and rigid.

Trunk large-capacity Renault trucks T with new and comfortable cabins replaced models Premium (T) and Magnum (T High). The cab is made tapering in the front part (the width of 2.31 m forward and 2.5 m to the rear, the windshield is installed with a slope of 12°), which showed a decrease Cx by 12%. Ergonomic instrument panel is made curved. In 2016, the T series was upgraded aerodynamics further improved by 2% (under the bumper there is an additional spoiler, but spoiler nacisnij lost the metal frame). Series modular design with reinforced frame spars of variable thickness, and a curb weight in 2016 was facilitated by 114 kg (including due to the lightweight main gear). For medium-haul transportation designed the basic line of T Series. Types of cabins – day Cab, Day length 1.8 m, low sleeping cabin Night & Day Cab with a length of 2.31 m, or the average bedroom cabin Sleeper Cab with a length of 2.31 m and internal height of 2.14 m. the flagship of the new model range – Renault T High for long-haul and international transportation supplied exclusively with high cabin High Sleeper Cab with a flat floor, internal height 2136 mm which is equipped with the top engine DXi 13, which in 2016 received as 11-liter Sistemas centralized injection. Cabin top 520-HP version of the T High Edition, presented in 2016, complete with seats and steering wheel trimmed in leather with stitching in red thread (the exterior of the cabin also features a combination of matte black color with red decolam), seat belts red, steel and carbon fiber inserts on the dashboard and doors. We take special care of a special interior lighting and, although the red, but not giving flare the illumination devices. The truck is equipped with adaptive cruise control and GPS. The total weight of the truck the T variant chassis is from 19 to 26 tons, in the embodiment of the truck tractor from 18 to 26 tonnes (gross combination weight from 40 to 60 t), wheelbase or 4x2 or 6x2. serial robotic 12-speed manual gearbox Optidriver, numerous electronic systems – adaptive cruise control Optiroll automatically include the Parking brake when the engine stops, the system alerts about a possible frontal collision, the integrated traction control system of stabilization of ECS, the system of control over the rows of traffic on the highway, rotating lights, mountain "assistant" Hill Start Aid and more. The engine range Euro-5 for the Russian market is similar to the series and K is the upgraded DXi 11 (10.8 l, power 380, 430 or 460 HP) or DXi 13 (12,8 l, power 440, 480 or 520 HP), transmission – only 14-step "robot" Optidriver. From 2016 on T-series appeared intelligent cruise control Optivision, interacting with GPS that allows you to optimize the performance of the power plant depending on the terrain profile for the route and, ultimately, to save fuel. 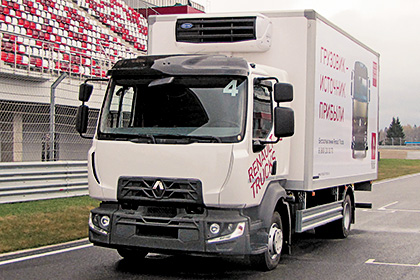 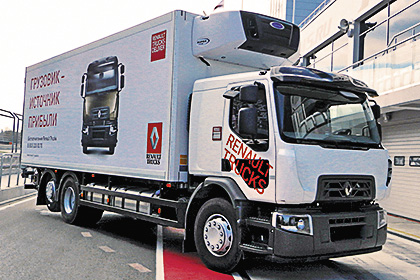 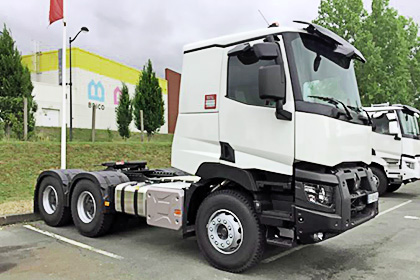 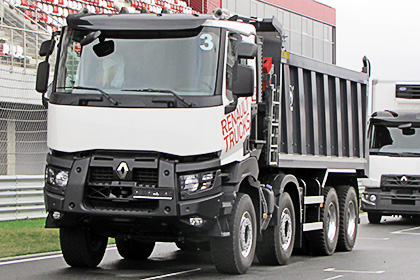 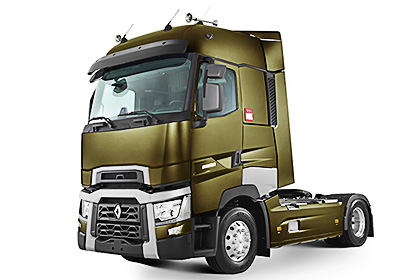