The Tatra company was founded in the Czech town of kopřivnice more than 150 years ago. In 1897 she produced the first passenger car and in 1898 the first truck (twin-engined!). Today Tatra is unique, manufacturers of commercial and military vehicles due to the tradition of application in the chassis of the spinal and not spar a stair frame. The first batch of trucks Czechoslovak stamps of the Soviet Union bought in 1947, but the real popularity in the vastness of our country (and especially in its Eastern and Northern parts) they received after the start of supply trucks first, 148th, and then 815-go families with a unique-cooled engine. In the 1980s, this leading Czechoslovak company annually manufactures 15,000 trucks, but after the collapse of the Soviet bloc, their production has decreased by more than an order of magnitude. Characteristically, in early 2017 were solemnly marked the release of 1000 (that's thousand) of the machine of the modern family T158 Phoenix. So what about the former the scale of exports the time of the CMEA in kopřivnice only sigh nostalgically veterans of the enterprise.

During the 2000-ies of the Tatra periodically changed owners and, in the end, signed an agreement on cooperation with DAF and with the Dutch company owning an American Corporation PACCAR. This has resulted in 2011 with the launch of a fundamentally new family of Tatra Phoenix T158, however, retaining a traditional chassis with a spinal frame, with which are combined the cab DAF CF 85, diesel engines PACCAR MX class Euro 6 (from 2014) capacity 360-510 HP and gearbox ZF. The model even received the title of "Best all-wheel drive vehicle of 2012". After another change of owner in March 2013, the company Tatra Trucks was owned Czech companies Truck Development and Promet Tools a.s. The new management was able to restore production and begin production of trucks, so the total volume of production of complete chassis brand Tatra in 2016 increased to 1326 units (+54.6 per cent) of cars of all modifications, including the unique 18-metre chassis with the wheel formula Force series 16x8 with a Caterpillar C32 diesel engine and automatic gearbox Allison.

The model range of Tatra for Russia includes mostly new family of Tatra Phoenix T158, although the directories listed former family Terr No. 1, but the conventional dump truck Jamal with the production filmed a few years ago. In 2016, the import of new Tatra trucks in Russia amounted to only 34 units (a decrease of 12.8%). 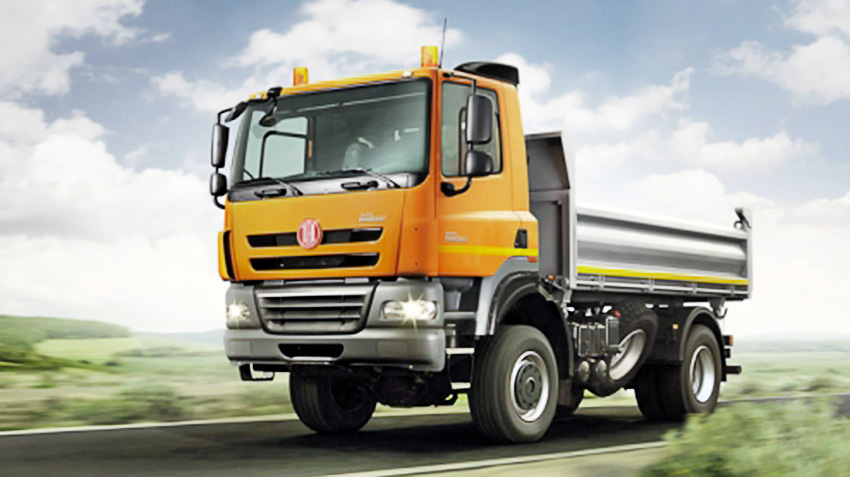 A new family of Tatra Phoenix series (T158) began producing in the fall of 2011, spring of 2012 it has been certified in Russia. In 2014, the series was upgraded and got the engines are Euro-6. All-wheel drive dump trucks equipped with cab DAF CF85 in the "day" version, but you can order it in the extended version of the sleeper. The engine for the Russian market – 6-cylinder PACCAR MX 340 Euro class 5 (with SCR system with urea) with a capacity of 462 HP, complete 16-speed manual ZF 16S 2530 TO or automated ZF 16AS 2630 TO a single-stage or optional 2-speed "razdatki". You can install and less powerful 408 HP diesel engine PACCAR MX 300. New Phoenix series for Russia was shown in the STT-2017 patieny truck T158 8P5S46.26B 10x8.2R capacity of 37.5 t with 510-horsepower PACCAR MX engine 375, and a 7-speed automatic gearbox Allison 4700. By the way, this truck has operated in the Czech Republic in the kaolin quarry of Kaznejov.

Family trucks Terr No. 1 with the last restyling in 2010, the cabin represents a further development of the second generation car Т815 (Т815-2) and now includes a line of several models and modifications, combined spinal frame design, four-wheel drive transmission and the initial adaptation to work in difficult road conditions. These machines are offered in two- (4x4), three (6x6), four- (8x6 and 8x8) and even potionem (10x8 and 10x10) versions, with a short "day" extra long "sleeping" and two-row cabins, and some modifications of dump trucks and chassis for better weight distribution along the axes hoodless cabin shifted slightly back and located over the front axle.

The base for the series and now are the traditional diesel V8 air cooling ON AIR™ (classes from Euro-2 to Euro-5) a displacement of 12.7 litres, with a capacity of 380 or 442 HP and the Cummins ISL, ISM and ISX (Euro-2, Euro-3 and Euro-4) liquid-cooled power 300-607 HP transmission – 9-, 10 - or 14-speed Tatra Tatra-Norgren and Allison, plus a single-stage or two-stage transfer case. Front suspension on two - and three-axle models torsion, the four – spring rear suspension spring or spring-pneumatic Frame King that saved trucks from congenital "clubfoot" arising out of the constructive scheme independent suspension suspension. Brake mechanisms of drum-type complemented by ABS.

Trucks. unlike other European manufacturers of trucks the lion's share of Russian exports of the company accounted for Tatra trucks. And it is a family of Terr No. 1, part of the vehicles which are equipped with a 380-strong diesel remains the most popular with customers.

The load capacity of trucks, the design of which have been pneumonectomy suspension, in comparison with pure spring trucks increased from 16.4 to 19.5 MT, as a result, their total mass is not equal to 28.5, and 33 so the Body is used, or 9-CC three-sided unloading, or 12-CC, discharged ago.

Four-axle trucks based on the all-wheel drive chassis with a wheelbase 1650+2600+1450 mm, equipped with bodies rear discharge geometric volume of 14-16 m3 and with the full weight of 41 tons is designed to carry up to 24.6 and 25.3 per tonnes of cargo. In addition, customers are offered two versions of the wheel of enlarged diameter, designed for operation in extremely difficult road conditions and off-road. The total mass of the first of them is equipped with 16-CC-body, was increased to 46 tons, and has a capacity to 28.8 tons For the second modification, dissimilar to the same extended wheelbase, these values are respectively 42 and 24.4 t, and the body accommodates 14 m3. 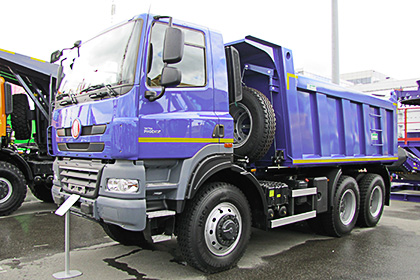 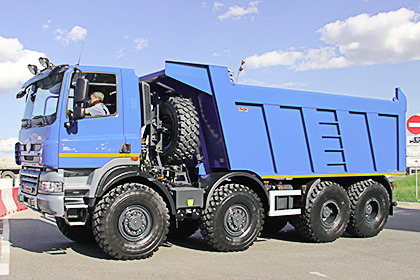 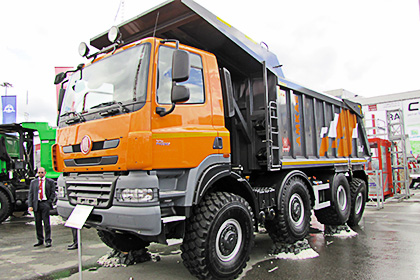 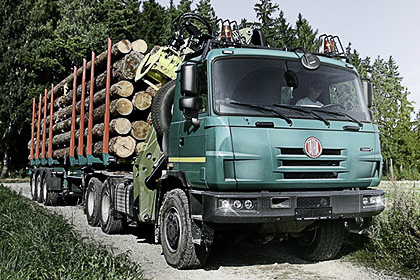 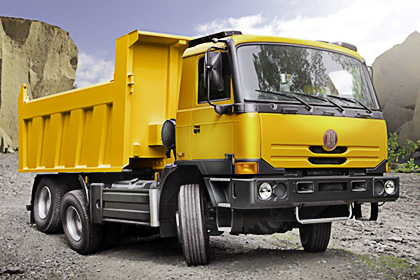 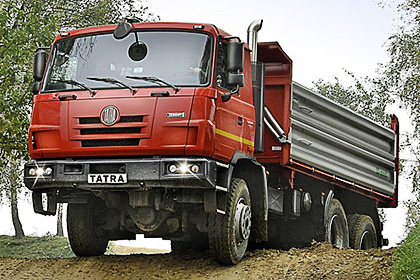 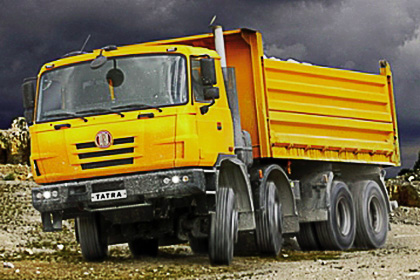 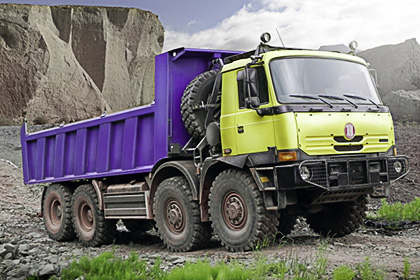 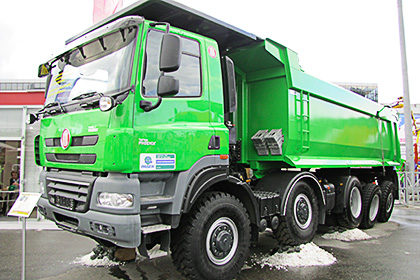