The largest Indian automobile (and one of the ten leading national corporations) company Tata Motors Ltd. (formerly TELCO) belongs to the multidisciplinary concern Tata Group (headquarters in Mumbai), founded in 1868 as a locomotive plant. In 1954 the company launched the Assembly of trucks under license from Mercedes-Benz, and at the end of the agreement in 1969, under its own brand Tata. Since 1989, TELCO started producing SUVs and pickups, and two years later – cars. In 2003, automobile production was renamed Tata Motors Limited. Modern production program Tata offers a full range of commercial vehicles from utilitarian pikapika light of LCV with GVW ranging up to 1 ton (in fact carerecovery the stories of tuk tuks) to heavy trucks with GVW to 49 t, and also minibuses and buses of all classes. The company Tata Motors today occupies the fifth place among the world's largest manufacturers of heavy trucks and the fourth among manufacturers of large buses weighing over 8 tons To date, the company Tata Motors and its subsidiaries employ over 62 thousand people. In February 2013, of the reconstructed gate of the factory at Jamshedpur came 2 000 000 truck brand Tata. Today it produces up to 200 models and modifications of various vehicles and 200 engines a day. In 2004, the Indian Korean joint venture TATA Daewoo Commercial Vehicle (trucks company Daewoo produces since 1995), which in 2009 launched a new series of heavy trucks Prima. Tata company pays great attention to export markets Middle East, Africa, China and the CIS (present on the markets of Russia, Kazakhstan, Uzbekistan, Azerbaijan and Ukraine), in total, the products are delivered in 182 countries. In 2005-2009, the Russian company AMUR was assembled from SKD kits chetyrekhtomnym model LPT-613 (Russian sector index AMUR-4346). In 2011-2014 delivery Indian cityregional LPT 613 were carried out through the Russian distributor OOO "AKIT". The firm even tried in 2013 to start the import of more severe 63,9-ton model TATA LPT 1116 492 with the engine of Euro-4. More important for the Russian market was considered Tata an agreement with the Russian company "Autotor" on the establishment of a joint venture for the industrial Assembly of the truck tractor 4x2 and Prima Daewoo series Daewoo Novus in the form of 6x4 dump truck chassis with wheel formula 4x2 and 6x4. It was supposed to equip trucks with Cummins diesel engines (Euro-5) and gearbox ZF. The production volume anticipated in the amount of up to 2 thousand cars a year, however, the market because of the crisis, and have fallen in 2015 have been collected only a certification party from 7 machines. In 2016, the Russian import was introduced only 2 trucks LP 613 (-71,4%) and 47 trucks (-39%), Tata Daewoo. 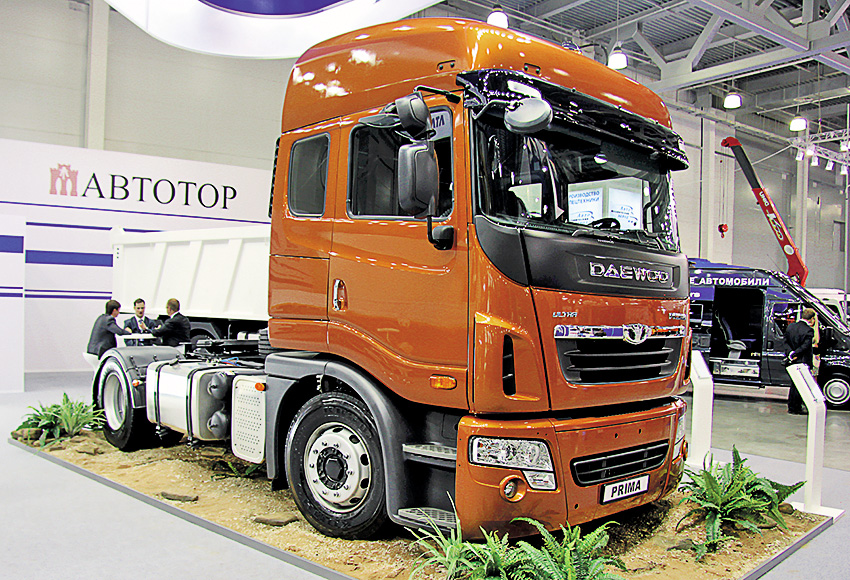 Presented at the COMTRANS-2013 range of trucks Tata Daewoo had in 2015 to gather Kaliningrad "Avtotor", but the crisis hit and the project was quietly blown away. In the photo – flagship tractor unit 4x2 GH2TM Prima with 440-horsepower Cummins engine (Euro 5) with a load of piss to 12.3 t

Returning at the end of 2011 the Russian market of 4-ton (gross weight of 7.25 tons) truck Tata LPT 613 is not particularly changed, but the efforts of the Russian dealer was slightly improved with the conditions of the local operation. For example, was enhanced by a regular heater, and the fixing units to the frame became more reliable. Order it is equiped with pre-heater Webasto, Eberspecher or "Teplostar". Chassis with a wheelbase 3800 mm loading height 950 mm equipped with side and tilt the body, as well as various specialized and special bodies and superstructures, including manufactured goods and isothermal vans (production of "AKITA", etc.), hydraulic cranes (layout "Chaika-Service"), evacuation of the platform LEVER, etc. Engine – license "six" Tata 697TC 65 (MB OM-352), upgraded to 2013 under Euro 4, the volume of 5.7 liter capacity of 130.6 signatures HP transmission – 5-speed manual, synchronized. Brakes pneumatic dual circuit, drum on all wheels. Wheel size 7,50х16-14PR. The volume of the fuel tank – 120 l.

The family of heavy trucks Daewoo Novus started to produce in 1995. In 2004, the series got engines Euro-3 and in 2008-m – Euro-4. At the end of 2012 common for all models angular cabin with a narrow sleeping place had been replaced by restyled with more flowing lines and a revised grille with less air resistance. The restyled series Ultra Novus brings together a variety of versions with an unusually large number of wheel formula – 4x2 from to 10х4 full weight from 18 to 43 so Even a car with a familiar formula 8x4 produced in two versions: standard with contiguous front steering axles and spaced axes where the second axis contiguous with the third. Patienoe 10х4 chassis provided with a lifting third axle, and the base it considered side body. Family engines Euro-4: row "six" Doosan DL08 7.6 liters, with a capacity of 320 HP or Cummins ISMe volume of 10.8 l, 420 HP, supplemented by a more powerful 481-strong QSX volume of 15.0 liters, and the V-shaped "eight" Doosan DV11 volume of 11.0 l, capacity of 350 and 420 HP With them agregation 10-, 12 - and 16-speed manual transmission or 6 -, and 12-step machines. 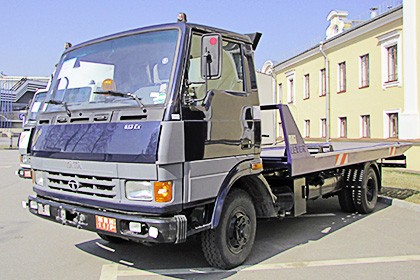 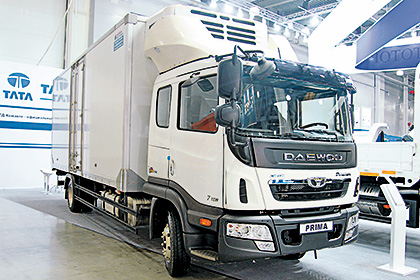 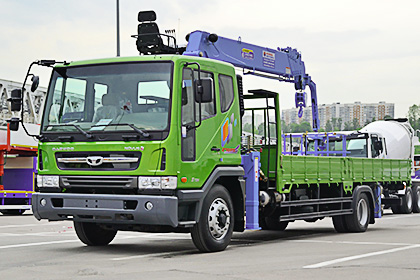 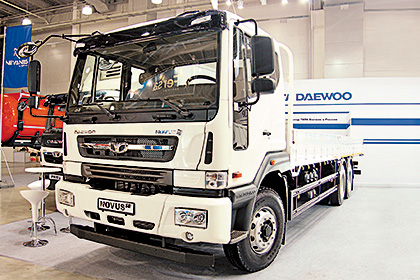 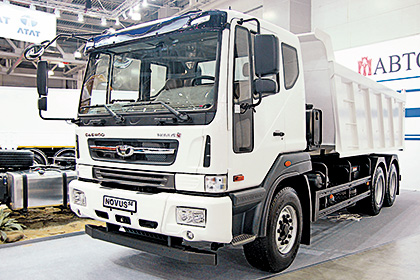 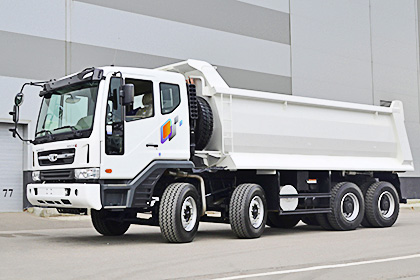