The Swedish company Scania was founded in 1891, and the first truck was created in 1902. the Debut of Scania in Russia was held in 1910. After a long break delivery trucks Scania in Russia resumed in 1990, and in 1993 started to work the Russian office of the company. In 1998 it was officially registered exclusive importer and distributor of Scania equipment on the market – OOO "Scania-Russia". Since August 2008, it received its present name – OOO "Scania Rus". In 2010, in the village of Shushary near St. Petersburg was opened the factory of OOO "Scania-Piter" for the production of trucks Scania, total investment in which amounted to 10 million euros. The company specializiruetsya to build the chassis on which the customer can install various add-ons: dump body, concrete mixing plants (mixers), road equipment, etc. the Capacity of the plant allows to produce up to 5,000 cars a year. Since 2012, Scania started to mount on your chassis directly to the conveyor body Wielton tipper and mixer Liebherr.

Further progress has been made on the Next Generation – the new (fifth) generation of trucks from Sardelle with the new generation of 5-cylinder engines. To develop the successor to the super successful fourth series took ten years and 2.1 billion euros. The appearance of the new series, while maintaining brand recognition has become more dynamic and modern, including the grille and lighting with xenon and led running lights. 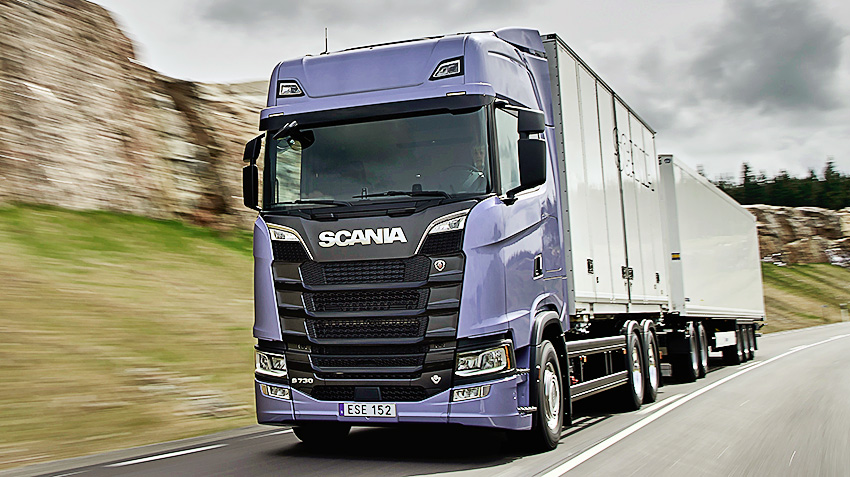 I wonder what are the optional additional headlamp moved up under windshield (on top versions). At the same time the aerodynamics of the cabins further refined, even removed the sun visor, and for cooling the sidewalls created by the new vent. In addition, from June 2017, the company Scania offers a new generation of V8 engines of class Euro-6 with a volume of 16.4 l capacity options 520, 580, 650, and 730 HP Engines features the use of advanced technologies that allowed to reduce their weight. The overall reduction in operating costs and fuel consumption amounted to a respectable 7-10%. The official premiere of the New Generation Scania will be held at the exhibition "Komtrans-2017" in September. 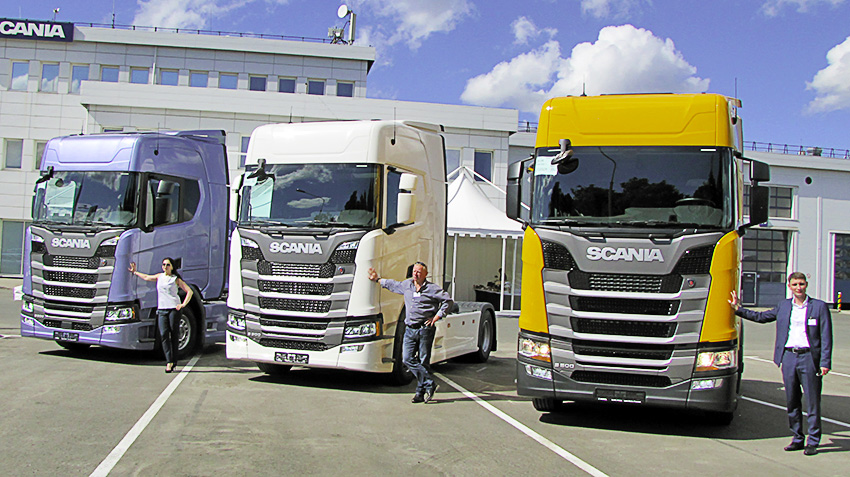 The first trucks Scania new generation was handed over to the Russian customers.
at the beginning of August 2017 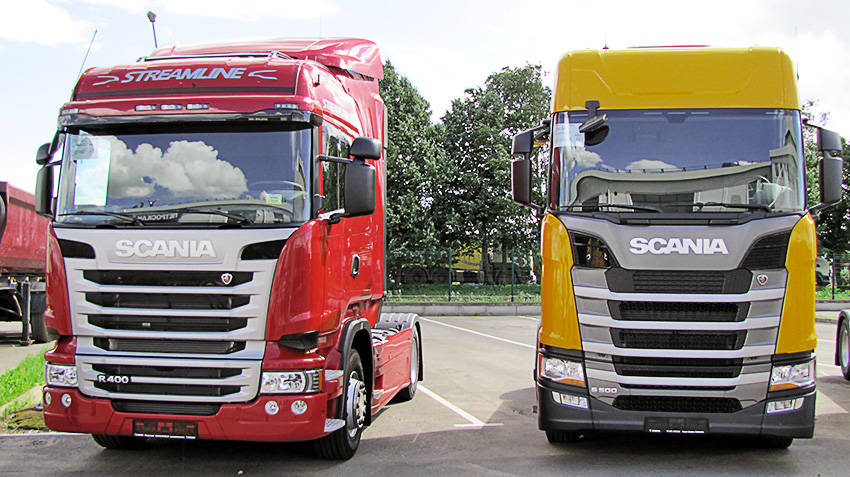 Vans P series is designed for local and regional traffic, primarily for retail chains and industrial enterprises, to work in the public sector and road cleaning sector. There are construction modifications to these machines, we offer Russian customers as dump trucks. The range includes mostly two-, three - and four-axle chassis with the drive, usually on one axle with steered wheels one of the axles of the rear truck. However, the range of models includes truck tractors with a 4x2 and 6x2, as well as construction of the chassis with the wheel formula 6x4 and 8x4. In addition to chassis standard height, used chassis with a reduced height of the frame, and shifted forward cabin of low height, that is necessary to install cranes, telescopic towers, ladders and other special equipment made with elements.

Used cabs are mostly of the regional "R" in a short or long options, or the option of a single bed. In engine compartment install or 5-cylinder 9-litre diesel (with him agregation 8-speed manual transmission with a divider), or 6-cylinder diesel with a volume of 12.9 liters (paired with 8 - or 12-speed manual gearbox, complemented by a divider and/ or dual). Mentioned power units meet the environmental standards Euro-5 (capacity 250 and 310 HP 9-litre engine and 360-440 HP 13-litre) or custom EEV ( Euro 6 (250-360 HP for 9-litre and 370-450 HP 13-litre) on the output shaft of the transmission, by order establish a transmission brake – retarder, which is integrated with the engine retarder and braking system. Useful (free) length supplied in our country the standard chassis, two-axle utility models is in the range of 6.4–7.85 m, the three-axis is 7.65–8.4 m, and for building three - and four-axle versions of these values are, respectively, a 5.7–6.6 m. 5,95 and Suspension or full air, or with a parabolic front springs.

The main purpose of the Scania G series, construction and other transportation-related work in difficult road conditions. Cars are offered in the options of the truck tractor or the chassis as the rear-drive and all-wheel drive version with normal or reinforced chassis, with a standard or extended height frames, with pneumatic or spring suspension, with geared bridges. Cab – short and long versions of the models R and G. For the Russian market Scania G-series can be equipped with engines of five different standards that meet the requirements of Euro-3 to Euro-6. The family of 9-litre 5-cylinder engines with a capacity of 250 and 310 HP (Euro 5 and EEV), or 250-360 HP (Euro 6) which agregation 8-speed manual transmission with a divider. The family of a 13-liter 6-cylinder inline diesel engines include engines with a capacity 360-480 HP (Euro 5 and EEV) or 370-490 HP (Euro 6). They are equipped with 8 - or 12-speed manual gearbox that addition of divisors can be equipped with demultiplikator, and in some cases – additional "crawling" gears. Most of the proposed CP can be supplemented with a retarder, which is consistent with the main braking system of the motor retarder.

The main transport over large distances created the flagship of the collection of Scania R-series two - and three-axle trucks and truck tractors. They are equipped with cabs R-series with a flat floor, providing drivers the highest among other proprietary cabin comfort level, and include, depending on the modification of one or two beds. The luxurious facilities and the most spacious cabin is a cabin in the performance of the Topline. As a result of restyling 2010 there is a new grille with larger slots, led running lights and a new dashboard. In 2014 in Russia offer and upgraded trucks Sreamline with a more comfortable interior, special aerodynamic bodywork, the cabin, numerous active safety systems and powertrain with the regime Opticruise. The cabin has a sliding table above the passenger seat and a wider pull-out bed. Updated gamma motor cars of the R-series starts with a 13-liter 6-cylinder engines of various capacities (360-490 HP), proposed for the Russian market in versions Euro-5, EEV or Euro 6, which sets equipped with dividers 8 - or 12-speed manual, which in addition to the divider often complement the dual, as well as additional "crawling" or "fast" steps. In addition, the proposed V-shaped 16-liter "eight" with a capacity of 500-730 HP In the leading axle can be applied to the wheel motors. Height SSU offered in Russia, the standard backbone modifications of truck tractors is 1100 or 1150 mm. Suspension or full air, or springs on the front axle.

The range of cabs for the new generation of Scania trucks created a completely new (even the frame is replaced) and includes in addition to the usual series P (regional), G (intermediate) and R (main) is also the first Swedish brand high "Sverdlovenergo" cab with flat floor series S. Design of hinged panels of the cab are made modular, which facilitates repair. Taking orders for the new generation of Scania trucks began in mid-2016. Series equipped with six-cylinder engines of standard Euro-6 with a volume of 12.6 liters with a power of 370, 410, 450 or 500 HP, and for Russia in the fall of 2017 will be offered versions with engines of Euro-5. All types of engines, reduce fuel consumption by 3%. A new generation of transmission Opticruise brake intermediate shaft by 45% reduce the time shift. In addition, from June 2017, the company Scania offers a new generation of V8 engines of class Euro-6 with a volume of 16.4 l capacity options 520, 580, 650 and 730 HP System adaptive cruise control allows you to facilitate the work of the driver when driving in slow traffic. Brakes are reinforced by moving the front axle forward by 50 mm and lower center of gravity. For the first time in the world on the main truck provided side airbags-curtain that trigger the rollover of the machine. 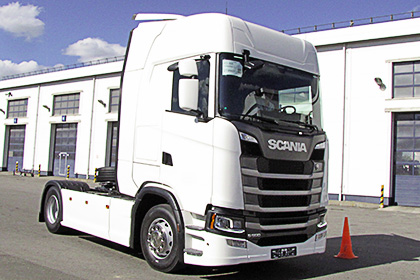 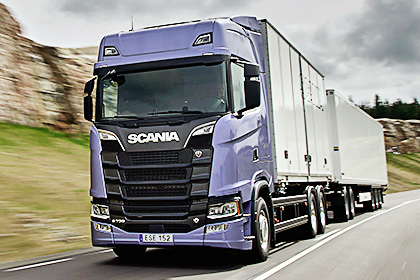 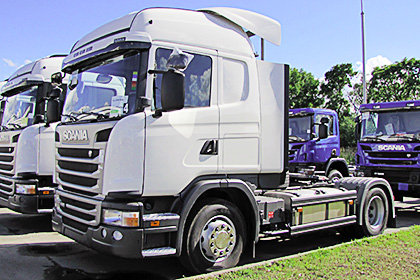 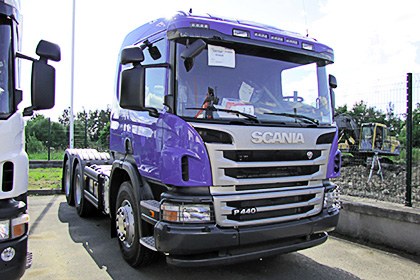 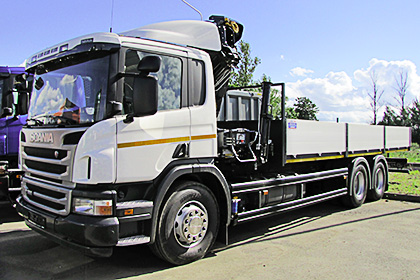 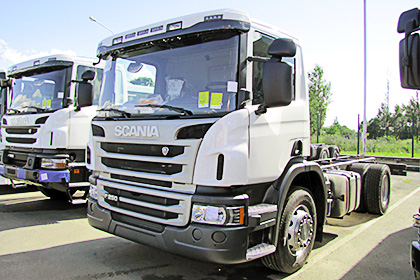 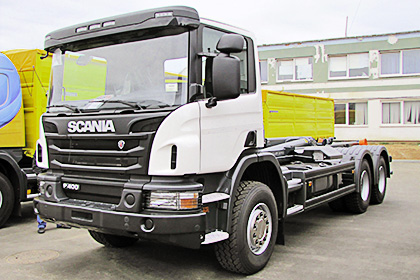 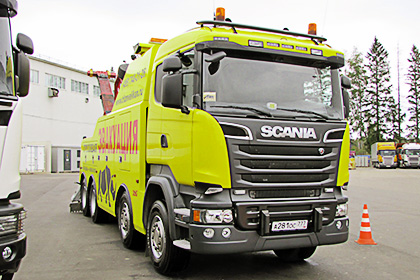 Since 2007, OOO "Scania Rus" started deliveries to the Russian market of trucks Scania, for the first time in the practice of sales of foreign trucks taking on all liabilities for warranty and post-warranty service and spare parts complete truck without a sharing of responsibility between the supplier of the base vehicle and manufacturer of dumper. For this, the company has concluded long-term contracts with European manufacturers of body superstructures, thereby not only simplifying maintenance dump equipment sold, but also significantly reducing the timing of its delivery.

In our country put in main model with the wheel formula 6x4, 6x6 and 8x4 chassis which can be equipped with engines with a volume of 12.0 liters paired with 8 - or 12-speed manual gearbox with a divider, and at the request of the customer with dual, "high-speed" or "crawling" speed. Tipper platform with a volume of 14 to 21 m3 back discharge heated exhaust gases and an awning. 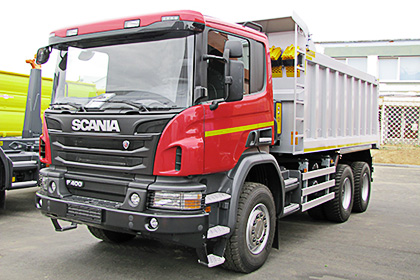 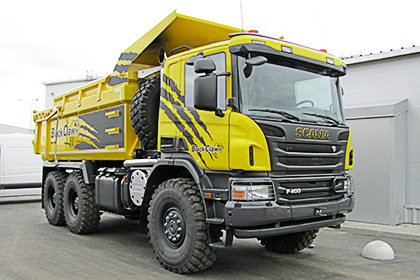 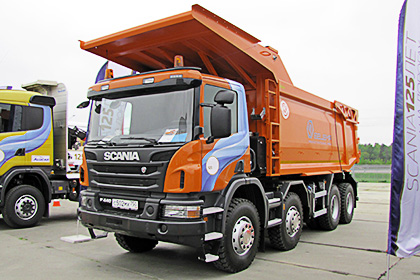 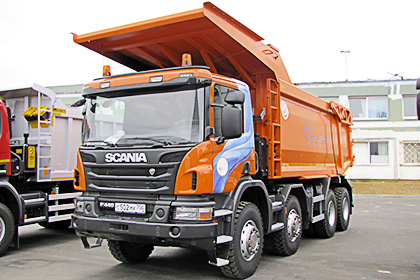